Why is your Windows PC GPU memory is full?

We have shared a few contributing reasons why GPU memory is full in your Windows 11/10 machine. We have faced the problem in the past and resolved the issue permanently after a couple of upgrades.

We noticed that many laptops struggle to run Discord and games together. You should find the program consumes the highest GPU memory in the system. We suggested the Discord users switch to the TeamSpeak program. Search for an alternative for the problematic program. We have shown you how to find the culprit and counter them.

Millions of Windows PC run on old-end machines. The XP was smooth on my old computer, but We installed Windows 7 on a ten years old hardware. You might have installed the latest operating system on older hardware, and it’s struggling to fulfill the software demands. We suggested a few solutions, and you can try them to resolve the GPU memory problem.

Infected Windows PC numbers have increased, and the administrators don’t take them seriously. Many users don’t know much about the malware infection, and they continue blaming the operating system for the performance decline. We have shown you how to maintain the software and keep it away from threats.

Nobody wants to pay for the Windows product key because they are expensive. You will find a product key from Walmart or any online store, but many users don’t have enough funds to purchase it. The alternatives focus on promoting illegal activators and pirated software. Avoid pirated activating tools because they make you feel special for a few days, then degrade the computer. Don’t download and install pirated programs.

Windows 11 killed millions of computers around the world. Fortunately, the Redmond-based company supported the earlier project till October 14, 2025. The manufacturers have released the latest drivers for the hardware, and you should update the latest drivers in the system. We recommend the users go back to Windows 10 or upgrade the hardware. We have installed Windows 10 on my gaming machine, and We don’t plan on upgrading the software anytime soon.

We have to understand the difference between an integrated and dedicated GPU. 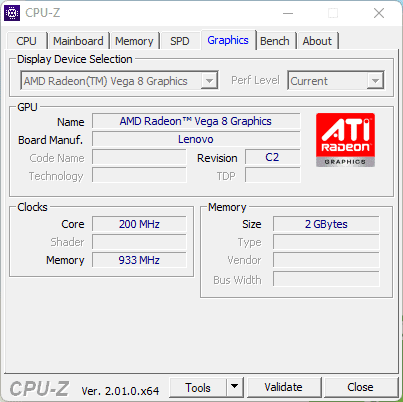 Desktops should install a dedicated GPU and choose a mainstream card for graphics-intensive work. The discrete or dedicated GPU has a PCB, dedicated graphics processor, memory, and cooling unit. Don’t let the small form factor fool you because the discrete graphics card can run heavy games and render 3D designs.

Most video editing software should get a graphics card such as RX 6500 or RTX 3060. We suggested the base models from AMD and Nvidia brands.

Let’s identify the Windows component overusing the system resources. I’m using a laptop with integrated Vega graphics, and it may give you a broader idea.

1. Press the Windows Key + X then choose “Task Manager” from the drop-up menu.

2. Use the slider and view the GPU stats. 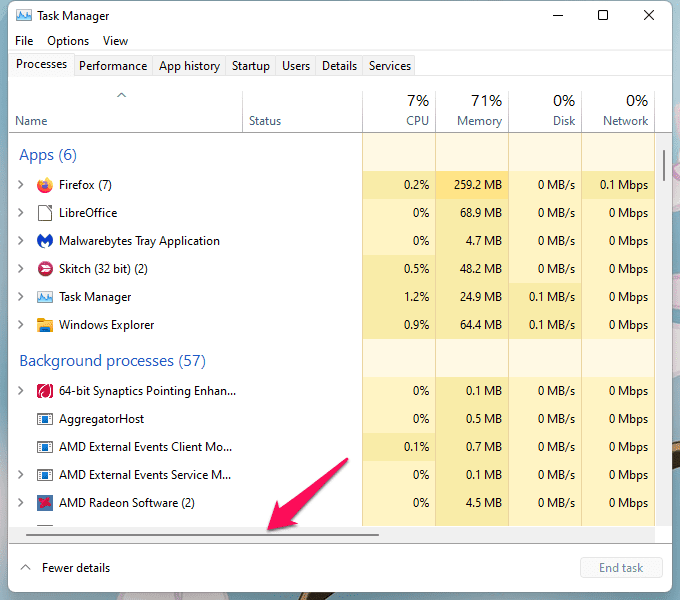 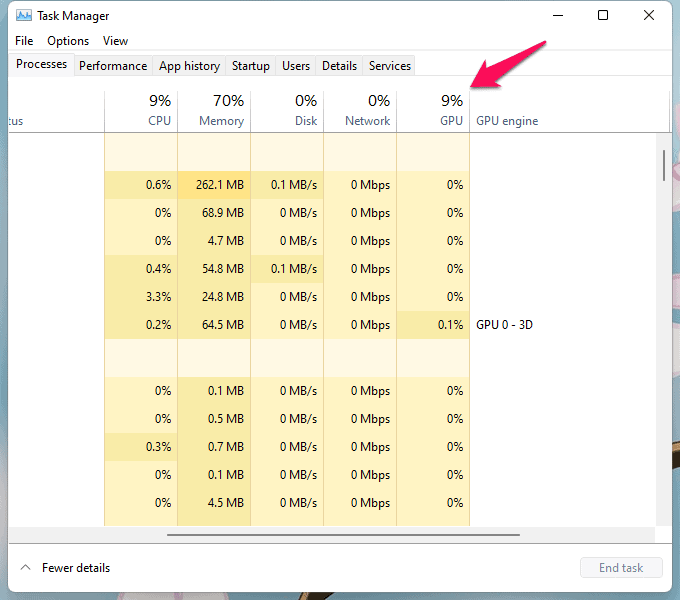 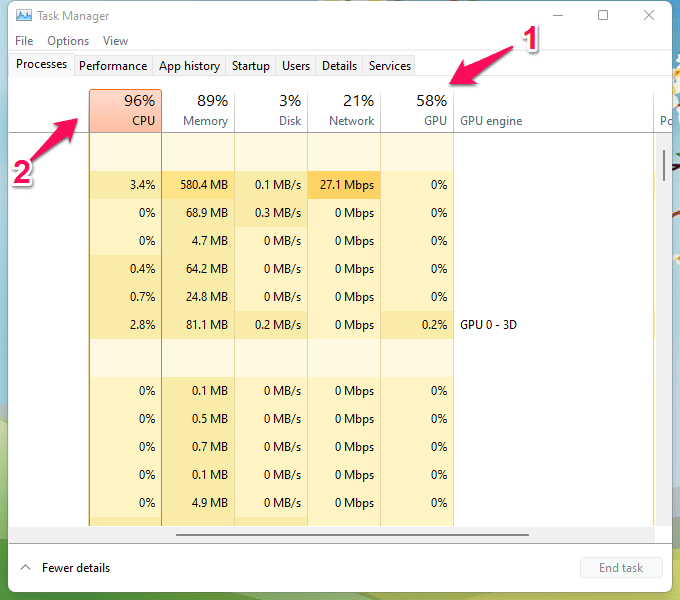 5. Scroll down and find the process consuming GPU resources. 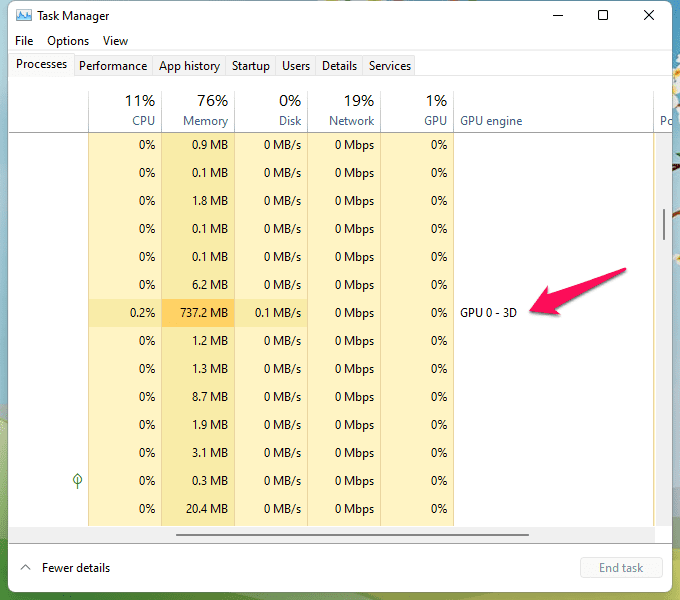 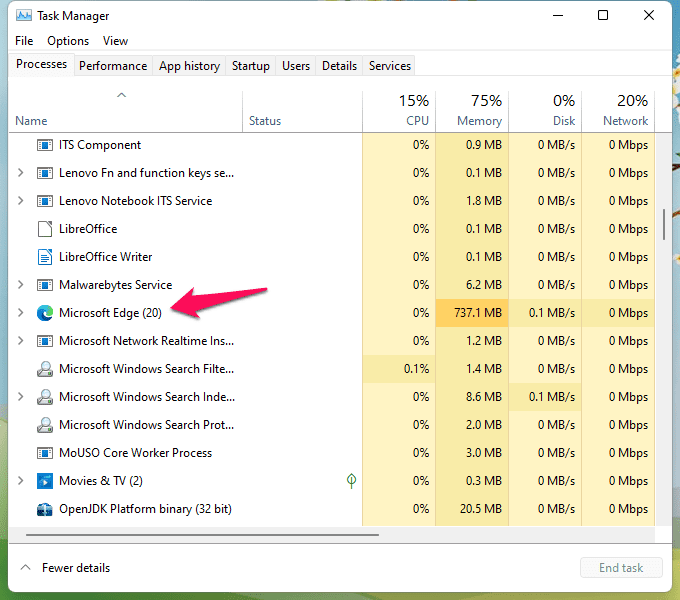 I have shown you an example above, and you can identify the culprit using the Task Manager.

Have you assembled a computer using custom parts? Many budget designing and gaming machines sacrifice a couple of components due to cost-cutting. Many low-end computers face the same problem, and they lack the latest hardware to run modern software.

I suggest the readers upgrade two components for a smoother experience. 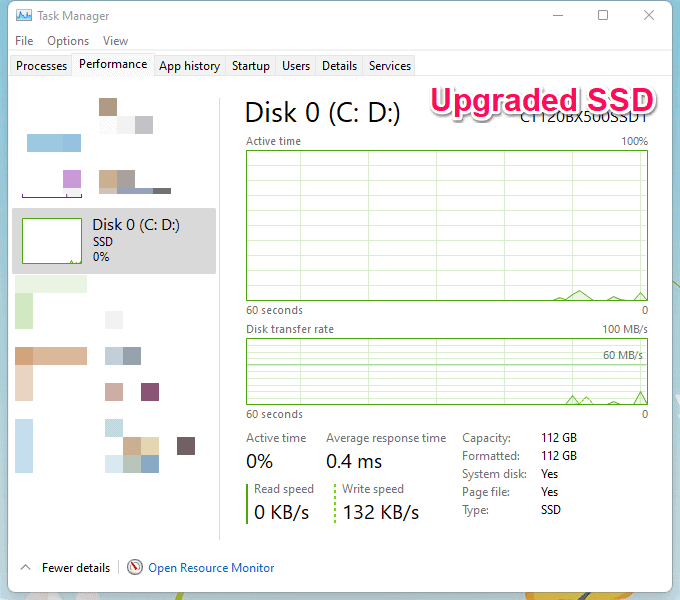 c. Add dedicated GPU (if your budget allows it)

Your GPU utilizes the storage as swap memory and stores the files in the Solid-State drive. The newer SSD has impressive read/write speeds, and it should serve as the swap memory vessel.

Most Intel and AMD mobile graphics use the RAM to share the memory. My Ryzen 5 system has 8GB RAM, but 5.88GB is available. The integrated graphics reserved 2GB for the video memory. Upgrade the RAM for a slight improvement.

There is no doubt that a dedicated graphics card resolves the “GPU memory is full” error.

We cannot leave the malware or virus in the system. PC threats break the documents, files, folders, system files, etc. Most threats don’t attack aggressively instantly, and they infect the system slowly. Take action to remove the threats from the Windows PC.

Windows Security may help find the malware, virus, adware, and spyware, but there is one problem. Microsoft’s security solution has let many threats slip away in the past. The Defender solution is inconsistent, and you can opt-in premium solution for the time being. 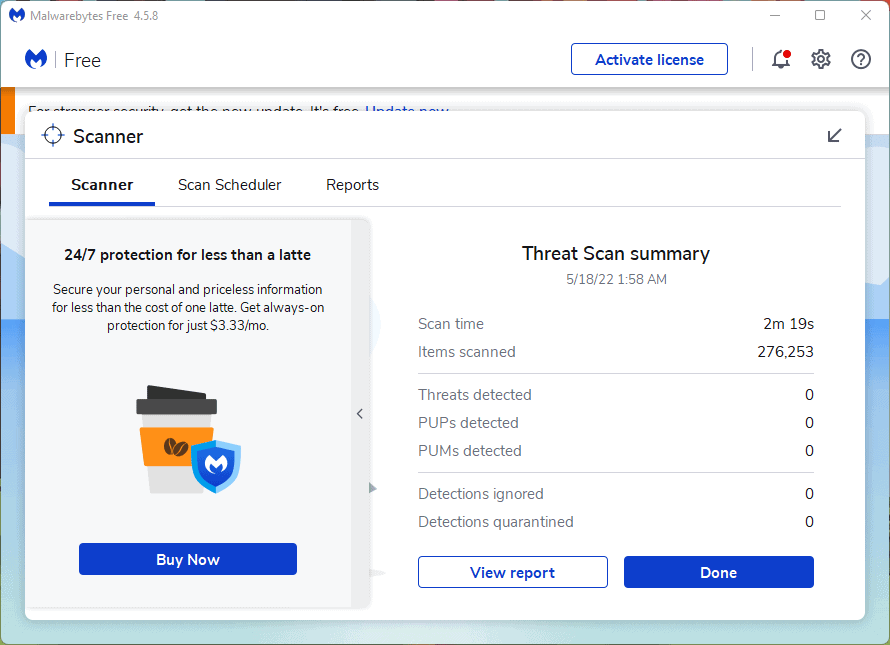 Malwarebytes team didn’t sponsor us, and I’m an active user. Run a full system scan and quarantine the threats.

Pirated programs are a demon in disguise. Many privacy invaders and hackers admitted to entering your domain using pirated software. I recommend the users go back to the official Windows OS and uninstall the pirated programs. Let me show you how to remove malware from installed programs on Windows PC. 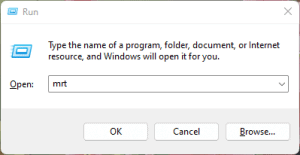 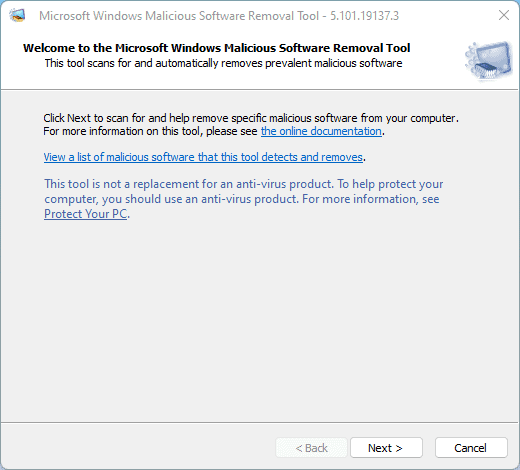 4. Choose the “Full Scan” option, then click on the “Next” button. 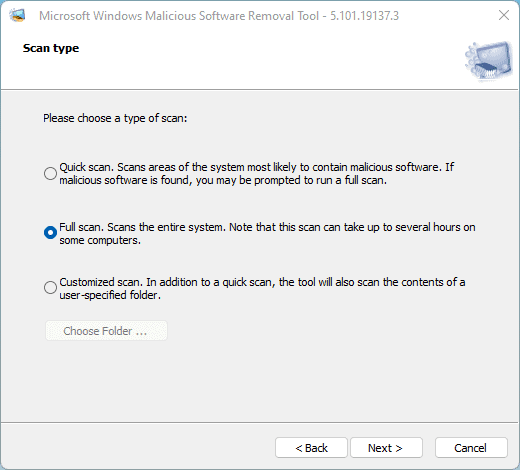 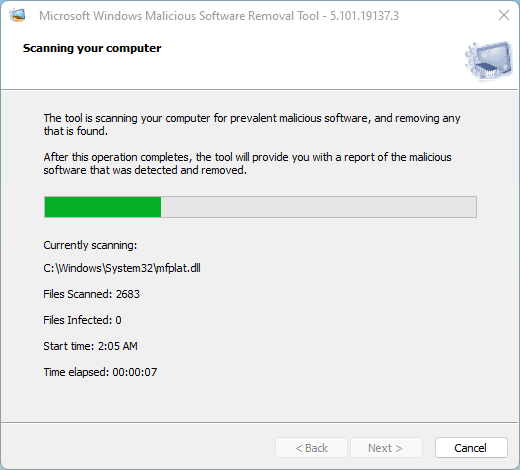 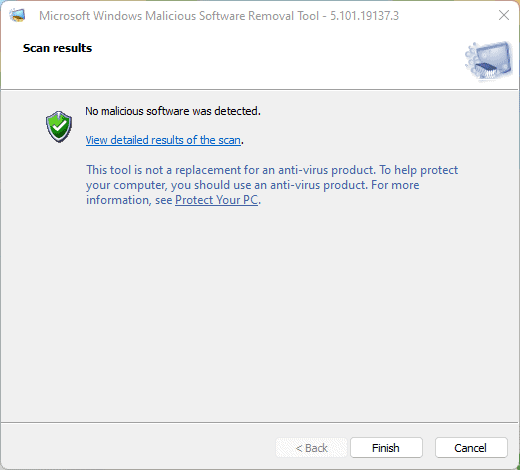 Don’t use the computer while the system scanning is going on. Stay away from the keyboard, and let the scan finish. Disconnect any removable devices such as flash drives or external storage devices.

Find alternative programs and get rid of pirated software.

You don’t have to pay a penny to use Ubuntu or any Linux software. 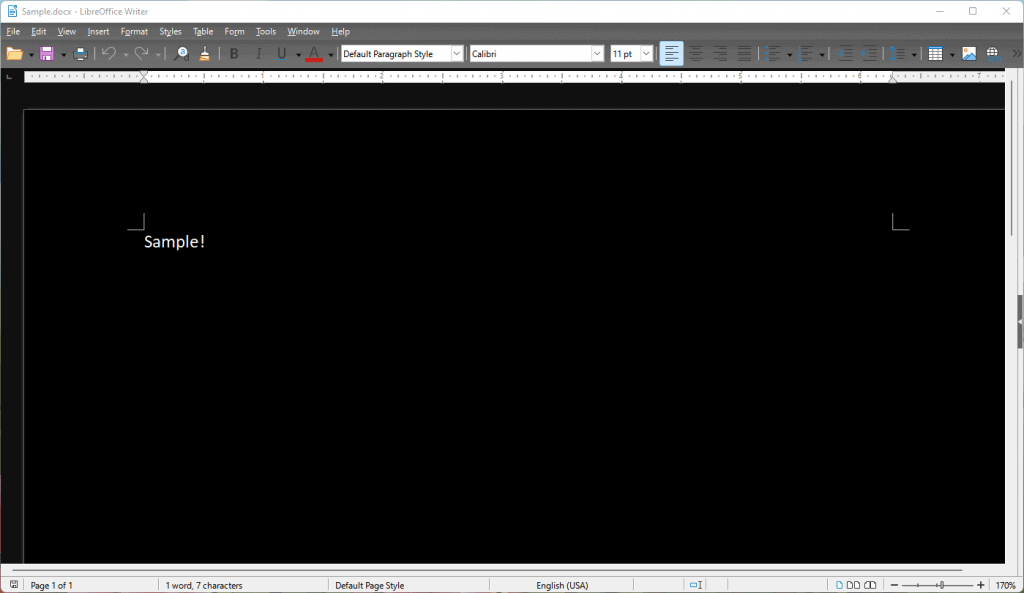 I have permanently switched to LibreOffice Writer instead of MS Word. 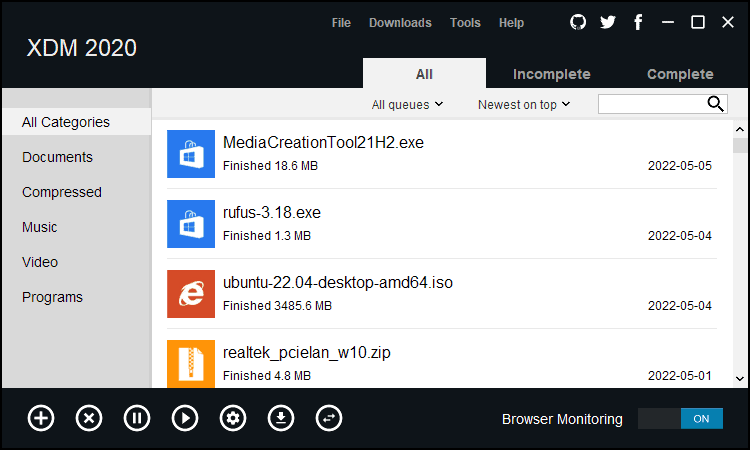 I ditched Internet Download Manager and used the latest XDM. 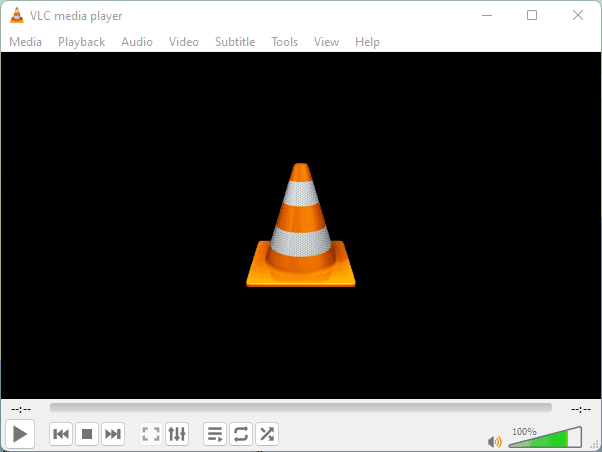 I use VLC Media Player on all computers. 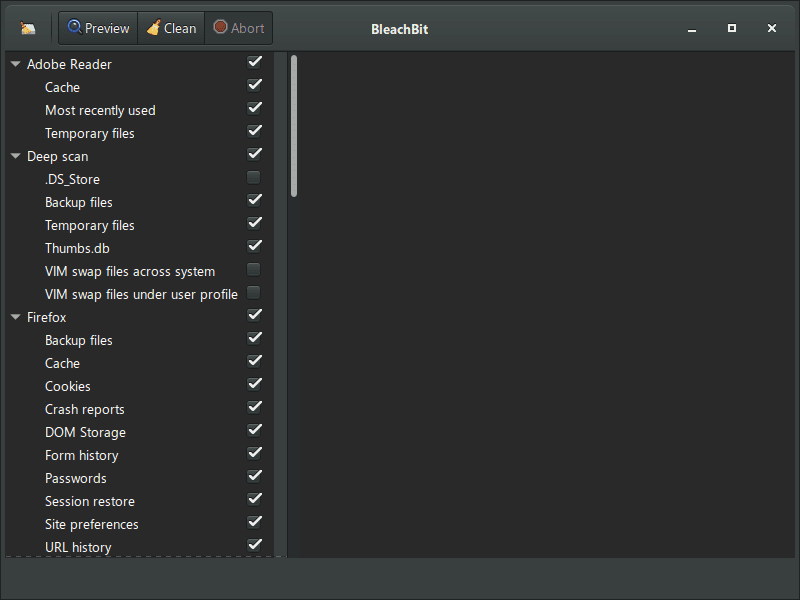 I uninstalled CCleaner and installed BleachBit instead. 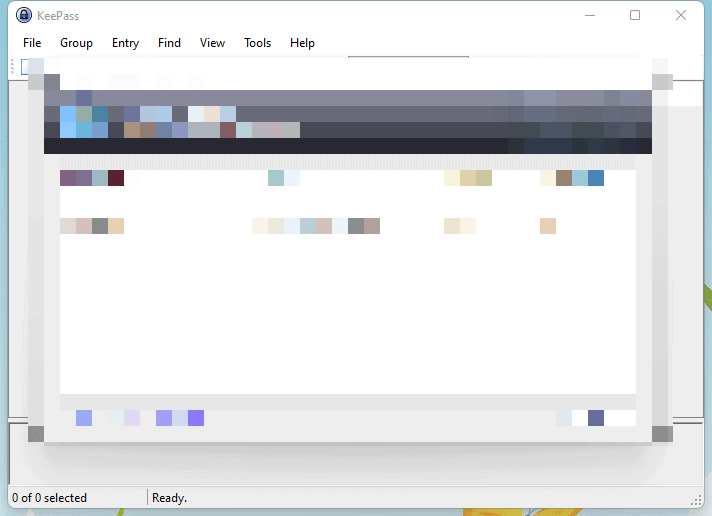 You should give Krita a chance if you don’t have enough to pay for PhotoShop.

I have recently started to use Kdenlive as a video editor.

I have suggested open-source and freeware alternatives above. I use the freeware

suggested above, and they are the perfect replacement for the paid programs.

Reinstall the Windows operating system when nothing is working in your favor. I insist the readers upgrade the hardware, and you can consult any certified engineer for hardware upgrade suggestions. I recommend the readers consider upgrading graphics cards and learn about the program and system requirements. Upgrade the hardware if the program says 16GB RAM and dedicated GPU. Let us know which solution helped you resolve the “your GPU memory is full” error.