Malenia, Blade of Miquella, is the most feared boss in Elden Ring. However, she is not a mandatory boss. But, you shouldn’t underestimate her either.

Many Elden Ring players consider her to be the most demanding boss in any of its games. She is undoubtedly a tough opponent. Although she isn’t impossible to defeat, she is indeed difficult.

Malenia can be defeated by understanding her move set, adapting to her signature move, Waterfowl Dance, and being open to changing your build.

Then, how to beat malenia blade of miquella in Elden Ring? Continue reading.

How to Beat Malenia in Elden Ring 2022 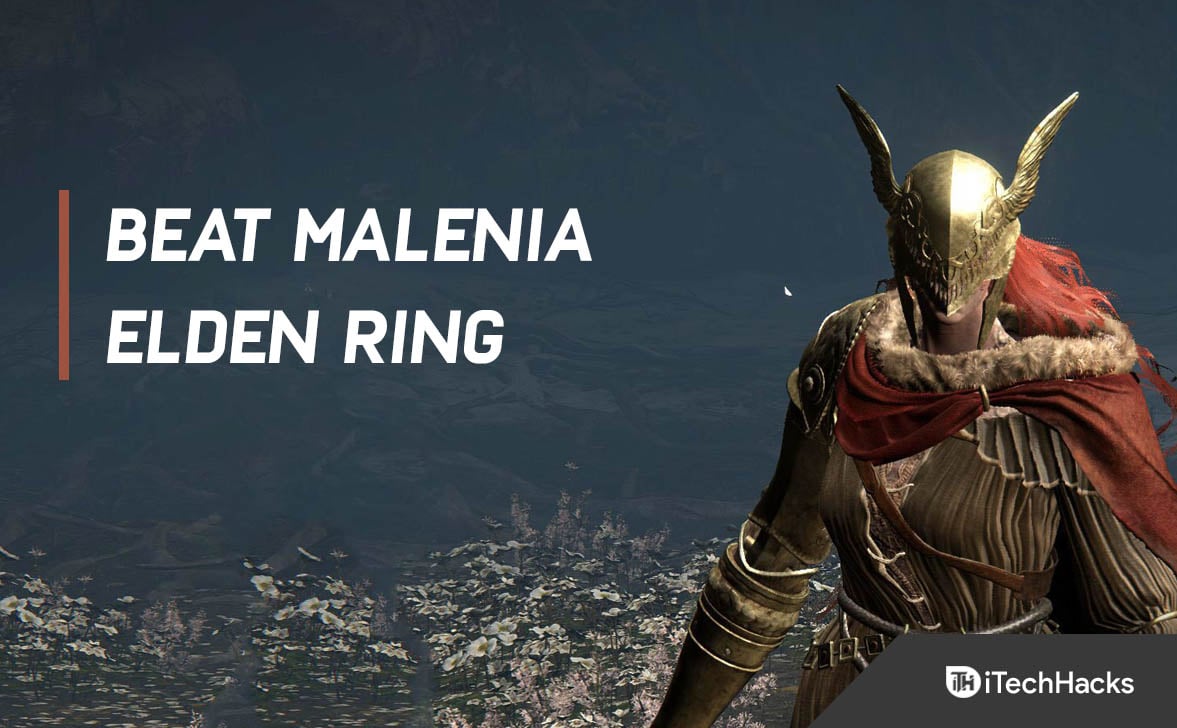 You can choose to have Malenia Blade of Miquella Elden Ring as your boss. To reach the Consecrated Snowfields at the end of the game, you must activate the Grand Lift of Rold and the Forbidden Lands.

So there you have it. Malenia stands Guard in Elphael, Brace of the Haligtree, one of the last legacy dungeons in Elden Ring.

But, before attempting to beat Malenia, you should have a level of 120 or higher. If you haven’t reached those lofty heights, grind it out in the dungeon.

You should also ensure that you’re using a high-level weapon in battle, ideally nothing below 22.

Also, the type of weapon you use is less important. But anything that results in blood loss would be great.

Be Good at Dodging

When Malenia hits players or their summons, she heals herself. This is probably the most important part of the fight.

And, any damage you deal with Malenia increases her health. This increases the time it takes to defeat the boss and reduces the chances of winning.

Malenia’s attacks can be blocked with a shield but still affect this pesky bug. Even when the hits are blocked 100 percent, she regains her health.

But, most players will get hit during a fight, even if they are careful. She uses short wind-ups on her sword swings. Moreover, her signature move, the Waterfowl Dance, cannot be avoided.

How To Counter Malenia’s Moveset Malenia is a very fast boss. Despite the distractions of summons, she can close distance incredibly fast on a new target.

And, every time she hits a player or summons she heals. With some of her moves, she can fill her health bar in a matter of seconds.

It may be helpful to incorporate the Bloodhound Step Ash of War and Flame Cleanse Me Incantations into your build to counter Malenia’s worst attacks.

And, with Bloodhound Step, the player cloaks, which makes it an improved dodge. It also covers a greater area.

Scarlet Rot is cured by Flame Cleanse Me and requires only 12 Faith. But, using the spell will require you to equip a Seal.

During the Waterfowl Dance, Malenia rears in the air for a moment. She then attacks exceptionally quickly. And her homing is extremely rapid.

But, you can then follow up with another series of attacks capped off with an AoE slashing attack. Shields with high Guard Boost counter-attacks and mitigate damage.

You can also avoid the initial barrage by sprinting in the opposite direction.

And, when you are close to Malenia, dodging behind her with every swing will ensure you altogether avoid being hit. However, this is quite a challenge.

A swift animation shows Malenia leaping above the player and thrusting at them. This move is usually used when you are far away from her.

But, by staying close and blocking her attacks, you will avoid being baited by this move. You will miss her if you dodge at the last second.

Malenia launches toward the player, grabbing them. Her sword then impales them on the tip of her blade after she throws them in the air.

It usually kills them in one hit. The move is well-telegraphed, however. And, you can avoid it by dodging toward her at the last moment.

Malenia charges forward and kicks the opponent during the kick, breaking their posture and creating an opening for a follow-up attack.

So, if you have enough Poise and Stamina on your shield, you can block this attack. Dodging backward will keep you from getting struck.

A combination of an upward slash and a horizontal slash is performed by Malenia. The damage is high.

In addition, Elden Ring is one of the few bosses whose abilities can be delayed indefinitely. So, be careful to dodge only as soon as she starts to swing upwards.

During her Charge Attack, Malenia rushes the player around and deals damage to her surroundings. Using the Uppercut combo as a follow-up can lead to a slam attack.

Scarlet Aeonia: Malenia always uses this ability after transforming into the Goddess of Rot. Once she has risen, Malenia will float in the air.

Afterward, she will release a massive Scarlet Aeonia in an area. And she will deal massive damage and build up Scarlet Rot.

When Malenia lands, roll away from her, then move away again to avoid the Scarlet Rot blast and explosion.

Phase Two will be intermittently interrupted by this ability. The explosion leaves her wide open for a few seconds after it has ended.

Among the Waterfowl Dance combos, the final slash’s large AoE radius makes it the most egregious.

So, by preserving Boluses or Flame, Cleanse Me, you can almost guarantee that Scarlet Rot will not buildup during Phase Two

Phantom Barrage: The sky will be filled with Malenia. The Scarlet Aeonia attack seems to be about to be used by her.

The player is attacked by phantom copies of the player, each of which aims for a specific area on the player and disappears as soon as the attack lands.

But, it may take a while for the attack to land. And, phantasms cannot be killed on their own. Therefore, equip a shield that blocks 100% Physical Damage.

So, by dodging each Phantom that comes your way, you can gain more distance from Malenia. You can cheese Malenia most easily by using Step Ash of War to avoid almost all her attacks in Phase One and taking advantage of her staggerability.

Every Phase One move by Malenia can be interrupted by colossal weapons.

The Blasphemous Blade, for instance, has a knock-down ability that can keep her down the entire time.

Also, Gravity spells can keep her down for a very long time.

Malenia is ridiculously vulnerable to Bloodhound’s Step Ash of War. The fast pacing of her rapid-move set makes it easy for players to phase through the feared Waterfowl Dance.

This Ash of War is well worth your time if you have a lot of difficulties defeating this boss.

As a result, if you are going to use Spirit Summons, we recommend the Greatshield Soldier Ashes.

In addition to distracting Malenia, each of them can guard against most of her melee attacks.

Malenia will be a little easier for Spellcasting and Ranged players. Their range is naturally greater than their close combat range.

And, despite Malenia’s gap-closers making it difficult to cast spells. Cast spells that are fast to cast and deal a lot of posture damage, such as Gravity sorceries.

You can also choose spells that are triggered when Malenia gets near, like Magic Glintblade or Carian Phalanx.

Players should use a Great bow or Hand Ballista in Phase One to exploit Malenia’s susceptibility to knockdowns. She can no longer be knocked down in Phase Two.

However, Frostbite and Bleed still affect her. And, this makes Coldbone Arrow and Bloodborne Arrow ideal throwable items.

For best results against Malenia, use the biggest and baddest Greatsword you can find. She is extremely powerful in Phase One.

Adding Jumping attacks to the mix will likely give you two or three Critical Hits on her. If Colossal weapons aren’t something you’d like to try, Malenia can be infected by Bleed.

So, if you want to trigger this effect reliably, consider a dual Katana build with lots of Arcane investment.

Despite sounding like a broken record, the Bloodhound’s Step Ash of War is extremely useful. But, if you’re in melee range for this fight, then you’re pretty much doomed to die.

However, you can continue fighting to keep Malenia’s Posture in check. If these tips cannot beat Malenia, there is no shame in summoning skilled cooperators. This tactic is tedious, however, due to Malenia’s deadly attacks.

Waterfowl Dance can also induce death. The heavy lifting may soon be done by strong players who are entirely happy to do the heavy lifting. So, sit back and relax.

It can easily withstand the full force of the Waterfowl Dance and Scarlet Aeonia.

And, before summoning the Spirit Ash, make sure you have removed all weapons, spells, and items that are ineffective against Malenia. Because malenia copies the player’s exact actions.

In the end, persistence is the key. Don’t expect to defeat this boss in the first few attempts.

Learn her attack patterns throughout a few evenings. And become comfortable with the timing.

This is all about how to defeat malenia in Elden ring. Players who defeat Malenia will unlock standard rewards for major bosses and advance in a game-changing questline. This is Malenia’s associated Remembrance.

Additionally, players can choose between her Katana, the Hand of Malenia, or the Scarlet Aeonia Incantation for 50,000 Runes. She also drops the Great Rune of Malenia. And this grants the effect of retaliatory health regeneration.

The player will see a dying Aeonia in the middle of the boss room after defeating Malenia and reloading the area. And, in Millicent’s questline, when the player receives the Unalloyed Gold Needle, they can use it at this Aeonia to create Miquella’s Needle.