Re-Logic released Terraria back in 2011 as an action-adventure game. And, despite the game’s age, it remains popular among its fans.

Its popularity is primarily due to the fact that it is a multiplayer game. This allows it to be enjoyed with friends as well.

The current version of this game is available for Playstation 4, Xbox One, Nintendo Switch, Nintendo 3DS, macOS, iOS, Android, Windows, Linux, Xbox 360, and many others.

However, users still want to know if Terraria supports cross-platform play, even though the game is available for different platforms.

So, let’s find out whether Terraria is cross-platform or not. 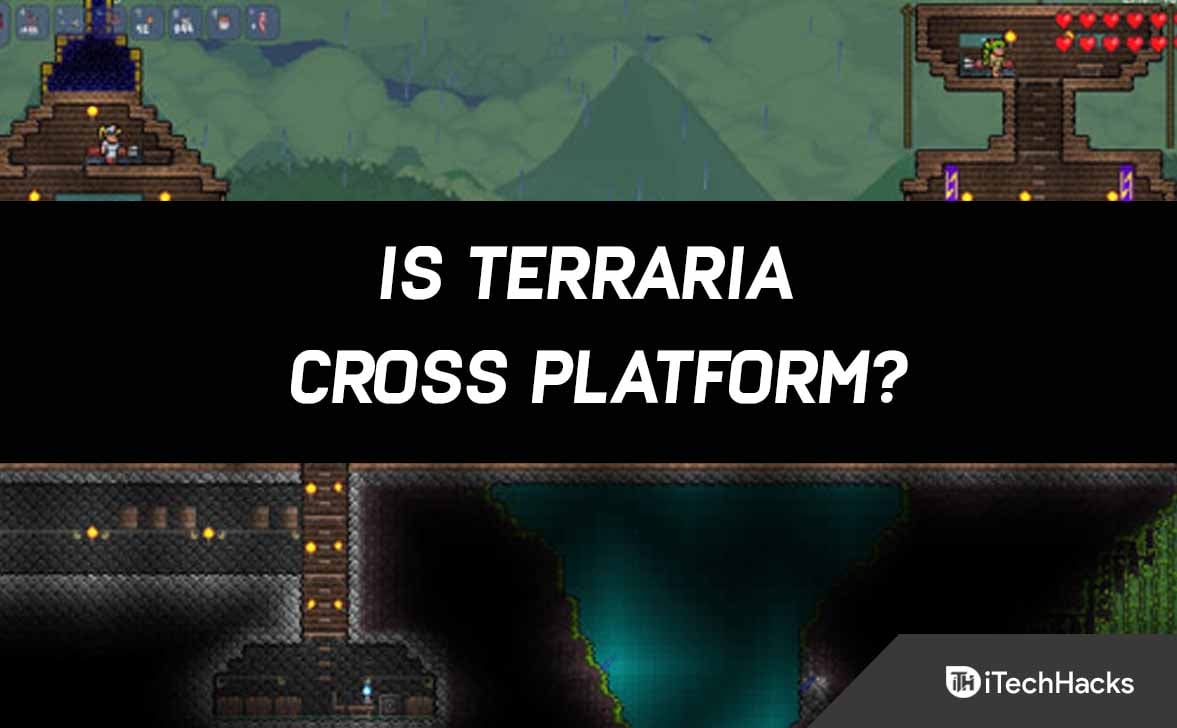 This video game combines elements of action-adventure and sandbox gaming. The PC version of the game was released via Steam Early Access on May 16, 2011.

By digging through the earth to find wood, stone, and ores, the player explores what appears to be an infinite world.

In addition, these materials are used to construct shelters and bombs, among other things, after exploration. They can be used for fighting a wide variety of enemies.

Usually, the goal is to survive indefinitely. While, other modes provide challenges like completing a boss within 25 minutes.

As a result, players learn about construction techniques they would not otherwise have considered.

A pickaxe is usually the player’s first tool. Each block of earth contains a tunnel, which can be used to mine dirt and stone.

Players should watch out for floating eyes that indicate a higher level of danger when mining deeper for more resources.

Bombs or other weapons will not be able to kill them quickly enough, so they will float up towards the player. The player will be damaged immediately upon contact.

Furthermore, the game’s environment contains many randomly generated hazards, such as spiked traps and pools made of lava.

Play Terraria on Microsoft Windows, macOS, Linux, PlayStation Vita, PlayStation 4, PlayStation 5, Nintendo Switch, and Xbox One. The game is also available for iOS devices such as iPhones and iPads.

Is Terraria Cross-Platform in 2022?

Unfortunately, Terraria does not support cross-platform play. As a result, gamers won’t be able to play with friends on different devices.

On the Xbox or PlayStation console, you can’t play with your friends if you’re playing the game on your PC.

The same operating system or device will be required for play with others. This may cause problems for some gamers.

Nonetheless, the developers are currently experimenting with cross-platform compatibility for the game.

There are several reasons for this:

However, don’t lose hope. It may become possible to play Terraria across platforms in the future.

Is Terraria Cross-Platform Xbox and PC?

No, it is not. As a result, Xbox One users and Windows PC gamers must play separately for the time being.

Xbox One users first got access to the game in May of last year. Despite PC gamers being able to play it, their console counterparts are not able to.

However, there is a possibility that Terraria could become cross-platform compatible at some point in the future, as the developers have announced they will make future updates for all platforms.

There is no cross-platform compatibility between Terraria and Nintendo Switch. It is not possible to join up with friends playing on the Nintendo Switch if you are playing the game on PC.

In order to join each other in-game, you must be playing on the same platform. Nintendo Switch and PC versions of the game are not currently cross-platform plans.

Because, in order to design cross-platform games that work across different consoles, developers need to take into account different specifications and hardware. And, that takes a lot of time.

Is Terraria Cross-Platform PS4 and Xbox One?

In a nutshell, no. There is no cross-platform compatibility between PS4 and Xbox One with Terraria. Currently, you cannot also transfer game saves from one console to another.

The game would have to be bought on the Xbox One if you were on PS4 and wanted to play with a friend on Xbox One.

Players who use Xbox One and want to play with friends on PS4 or PS5 face the same issue.

Is Terraria Cross-Platform PC and PS4/PS5?

The PC version of Terraria does not support cross-platform play with the PS4 or PS5. If you are playing on a PC, you won’t be able to invite friends using a console to play with you.

And, in order to use this feature, you must own Terraria on both platforms. The game cannot be purchased once and played on three different platforms at the same time.

For this reason, there is no cross-platform functionality between PS4 and PC.

Is Terraria Cross-Platform iOS and Android?

yes, there is a cross-platform version of Terraria for iOS and Android. Therefore, you and your friend can still play together if you have an iPhone and they have an Android phone.

Both iOS and Android users can download the game for free. And, it is possible to connect with friends regardless of which smartphone they are using.

Is Terraria Cross-Platform PS4 and PS5?

Yes, Terraria is cross-platform for the PlayStation 4 and PlayStation 5. Cross-generation play is the practice of playing video games on one console with friends who are using another console, whether it’s the PS4 or PS3 or even the very first PlayStation.

Is Terraria Cross-Platform Mobile and PC?

Yes, Terraria is a cross-platform game for both PC and mobile. You can play on your computer, and friends using their phones can join in the fun.

However, the game must be run on the same version for you to join up with each other.

How to play Terraria?

In Terraria, there is a cycle of day and night. The monsters that prowl the lands at night are far more difficult to contend with than those that tootle around during the day. You should therefore construct a shelter first.

You can build a house by cutting down some trees and using your axe to do so. In essence, this is how it is done. It can then be used to create better weapons. From there, it is up to the player to decide.

How to play Terraria with friends on different platforms?

You cannot play the game if you and your friends use different platforms, as we mentioned in the previous section. It can only be done if it’s played on a mobile device.

Therefore, if your friend has an iPhone and you have an Android phone, you can indeed play together. There is no other way to do cross-platform play.

So, now you know whether terraria is cross platform or not. If you are a mobile gamer then you have good news. However, for PS4 and Xbox players, they need to wait a little longer until the developers release cross-play updates for terraria.