BitLife is a very popular Life Stimulation game where player defines their role from born to death. They need to choose an avatar and can do whatever they want. You can also go inside the prison if you commit any crime. But if you go to jail, it will not be an easy task to come out of it. The world of Bitlife is at your fingertips with a device that offers all of it. It is possible to become a famous YouTuber or even buy your own ranch in the game. You can also get locked up in prison if you decide to walk the wrong path and commit crimes.

Bitlife has regular security prisons, as well as medium and maximum security prisons. And, prison sentences are determined by the crime committed. But, no one wants to spend time in either of these jails, however.

Before going to Prison, you need to commit a crime. You can kill any person or can also rob ATM for going to jail. But if you are escaping the prison and they caught you again, you will get double punishment and it will become more difficult to escape from the Prison. So let us know how to escape prison in BitLife.

So, it is only natural that you would want to escape. Jailbreaks, however, are not easy. So, we’ve gathered here all the jail maps in Bitlife to save you from some prison time. 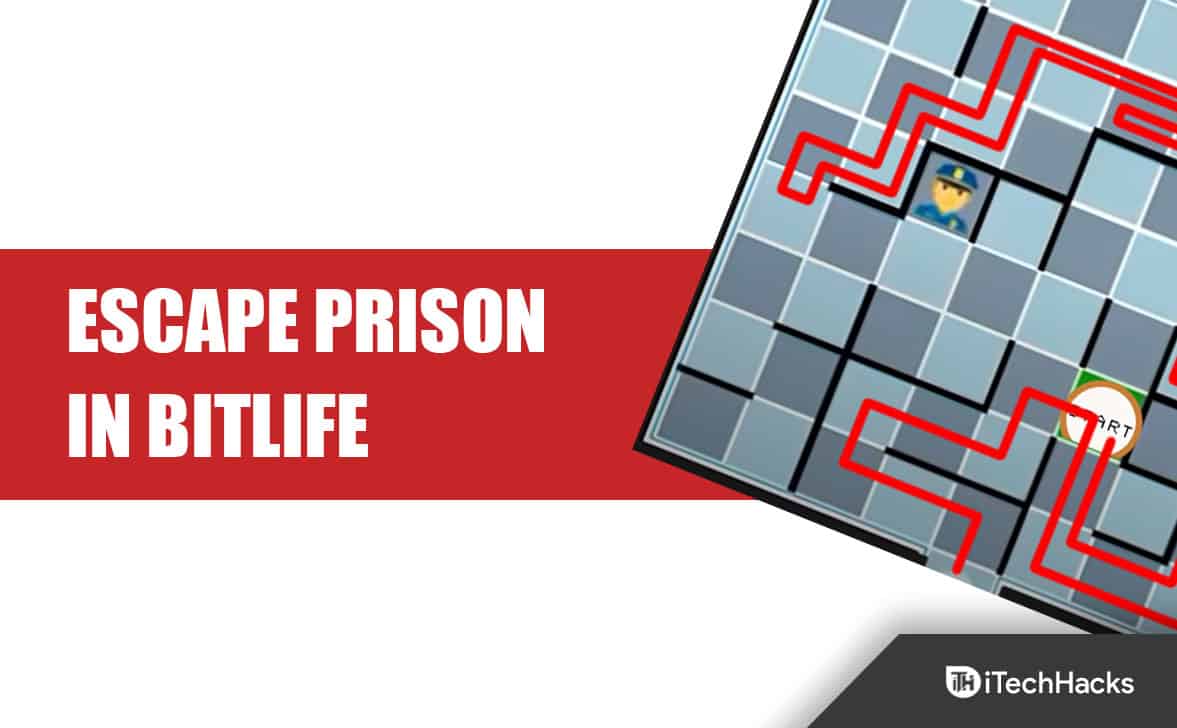 Escape Every Prison In BitLife 2022

And, for the cop to remove the blockage, he must move horizontally first. So,in order to escape a cop, you should always try to block him with any obstacle.

There are several prison layouts in the game. And, most of them are mirror images of one another. This means you have to make some changes to get out. But, if you do not successfully escape, the game moves you one year forward and gives you a second chance.

Let us know the map layouts that will help you to escape prison in BitLife. 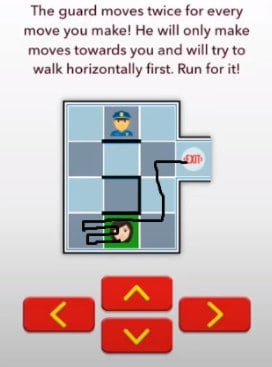 Well, this is the most precise map in this game where you just need to bring a security guard into the corner to trap him with a hurdle. Once you did that, you are free to escape from prison easily but make sure you are not doing any crime again, or else your punishment will get doubled.

This prison break map is a tiny 3×4 map. It is the simplest of the maps. If this is your first one, consider yourself lucky. In order to break out of this one, all you have to do is to place the trap in the only possible place to trap the guard.

This is a grid-based map in which both of you, the player and the guard will move simultaneously. The guard will move horizontally when they find your movement. So you need to start from right to left till the dead-end comes and then move in the forward direction. Now just bring back your character to the dead-end again and reach your starting position. Then you can easily reach the Exit point.

This is probably the easiest level to reach. Finally, you go back to where you started. From there, get to the exit and escape. 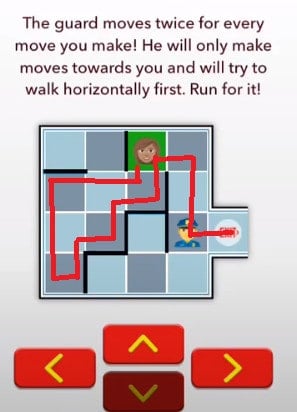 There is a start and an endpoint on each map. Also, on each map, there is a prisoner and a police officer. And, the prisoner is trying to escape. The guard moves according to an established pattern. If you can trap him, you may win. So, in order to avoid being caught by the Guard, you should move carefully.

Always stay a step ahead of them. Once you reach the exit point, you win. This map requires you to guide your character around a corner. So, to trick the guard and escape, move towards the exit point step by step.

To get the guards trapped on this map, you must basically lead them around the entire map. And, even with this map’s small floor space, trapping the guard doesn’t take long, considering the limited area. In other words, the back-and-forth takes no time at all.

This is a very easy map. You don’t have to trap the guards. As it will restrict itself by itself. Your best bet is to start moving toward the right.

In this map, the guard will stand just beside the exit point, so it will not be an easy task to escape. The guard will also take two moves from your one move. So you just need to grab the attention of the guard by moving towards him and then come to the starting point again.

Now just move to the exit point to escape. There are only four buttons on your screen and the controls are intuitive. If you move, the Guard will move twice for every move you make. As a result, you should plan your actions accordingly.

In this map, you are standing just two steps away from the Exit point but the guard will be standing between you and the exit point. So you need to take the left to the dead-end then just move in an upward direction till the end and just turn right to the dead end. Now just take a step down and take one step left, now you need to move to your initial position in the same way you come to this position and can reach the Exit point easily.

In other words, you can get out of prison through a variety of routes and other methods. However, it’s best to keep it simple. So, choose the option you find easiest. Then you will always get out. 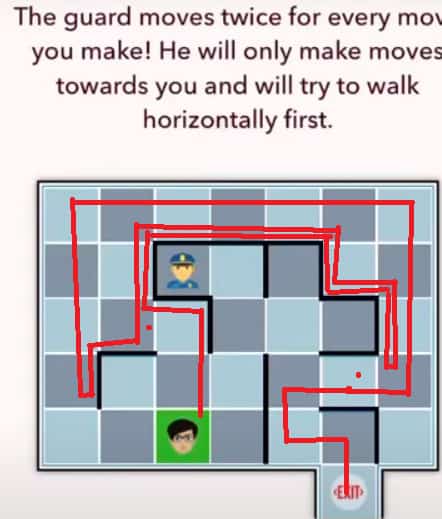 The Map of 5×7 and 7×5 are the same and users need to think identically to escape the prison. The guard is already trapped but you need to make sure that the guard will move twice for your single move. So just follow the red lines to get out of the Prison. 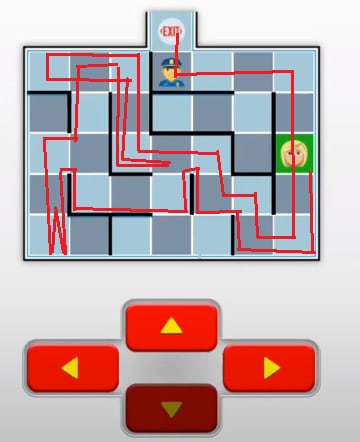 You’ll probably find this level to be one of the harder ones. The guard will need to be lured almost the entire perimeter of the level. Then you can lure him back until you get him in just the right situation. That way, you can escape.

It is always the guard’s horizontal movement that comes first. Additionally, if there aren’t any horizontal moves available, the guard won’t pursue you. You can then slide past the guard and reach the exit. 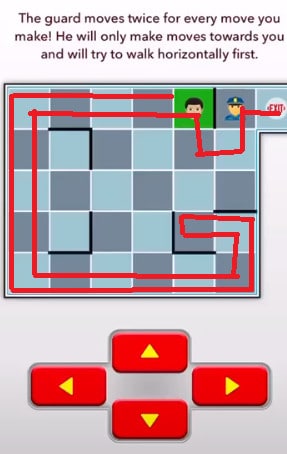 In this map, the guard will stand just beside you and before the exit point. So you cannot go directly to the exit point. You need to manipulate the guard so that they can chase you and you have to make your direction accordingly.

You will be caught instantly by the Guard standing over there. Therefore, you need to make the Guard chase you away from the location where you need to flee.

After that, you should start following your chosen path to escape and reach over here. 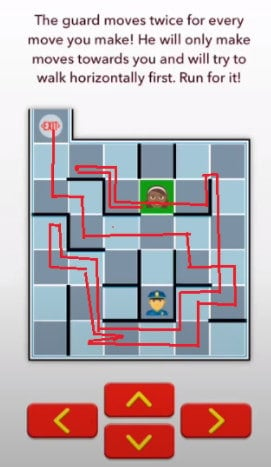 This is an adventurous map that requires some tactics to get out of prison. The guard will follow you at your every step. So you just need to maintain distance between yourself and the guard and have to implement strategies accordingly. Here we have given the solution in the image that you can follow to escape the prison.

Tricking the guards isn’t as simple as players think, so it could be a tricky map for some players. The Guard will always come back from the other end when they try to trick it.

As a result, you have to have a proper strategy to overcome all challenging levels. We are prepared to help you obtain a BitLife Prison Ribbon if you want to be incarcerated for only that purpose. You should first become a criminal in order to obtain a Prison Ribbon.

Now it’s easy to become a criminal because robbing a bank, killing someone, or snatching money from someone is a crime. Fortunately, there are no graphic scenes in the game. You can play mini-games and answer multiple-choice questions to find out what you enjoy in life. Everything you decide matters from the beginning to the end.

The Ribbons you earn will depend on your decisions. In the map of 6×6, you have to make some illogical steps to attract the Guard’s attention or bring him to the location you want. 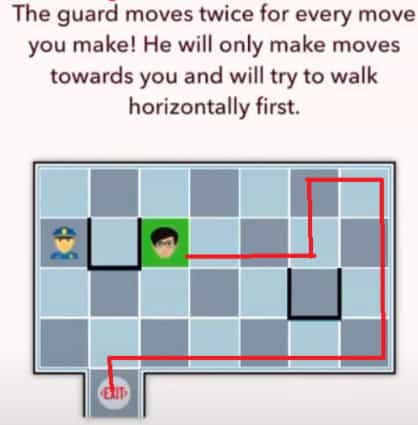 The 7×4 map is very easy to escape the prison in BitLife. You just need to take three steps left then move upward, take right, and just move in the downward direction to the dead end. Now the exit point is near to you, just escape the prison easily.

And, due to having a few more walls than some of the easier levels, you are able to trap the guard easier. 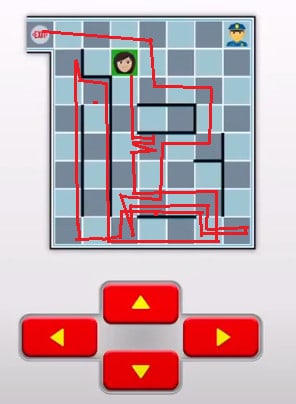 The Map Layout 8×7 will look very easy but it is quite tough and challenging because the guard will move twice for every move taken by you. So you need to move to almost the whole map to trick the security guard or else you will get caught and will get double punishment.

And, the Guard will move towards you. He will first attempt to walk horizontally. So, just follow the red lines. 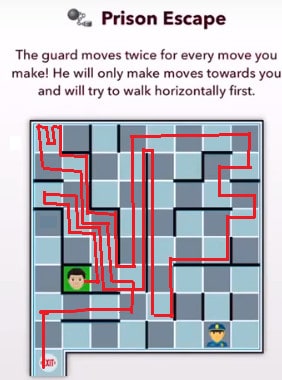 This is one of the toughest layouts you will get in this game. You just need to stay away from the security guard to reach the exit point. That’s why most of your moves should be in the left direction of the map and can plan your further strategies accordingly.

You should strategically scan the map to find the locations where you can trap the guards to allow them to move freely toward the exit. You will be moving mainly to the left of the map. 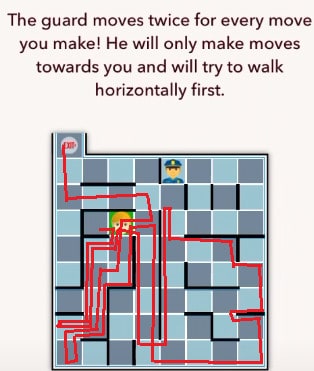 The exit point is guarded by only one guard. The red path must be followed to trick the guard.

After that, the prisoner must reach the end to escape. In the game, you become more skilled at overcoming the prison maps it aims to display to test your skills as you play.

How can I Escape Prison in BitLife easily?

So the Prison cannot get break easily, you just need to follow some tactics for that. If you are a beginner then it will take some time to become a pro player and then you can easily escape prison without any help.

Do I need to pay anything to download this game?

No, it is a free simulation game that is available on Play Store and different App stores, so you can download it easily without paying a single penny for that.

How can I go to jail in Bitlife?

To go inside the jail, you need to do any type of crime. If you can escape and then caught again by a security guard then you will get double punishment.

So, these were a few map layouts that will help you to escape the Prison. Hopefully, this guide on how to escape prison in BitLife was helpful to you. And, before you begin, you must understand the proper strategy and the track you need to follow. But, be careful though, because the Guard will move swiftly to catch you. In case you have any questions regarding the same, free free to drop a comment below.

How To Enable Windows 11 Screen Savers

Best VR Games You Can Play Without Controller