When you’re new to Minecraft or haven’t played with enchantments before, it can be difficult to determine what the best Trident enchantments are. It can also be difficult to understand the enchanting system at first. But, as soon as you figure out how to use it, it’s a game changer.

Moreover, a maxed-out Trident is among the most powerful weapons in the game. However, it is unlikely that you have encountered a Trident unless you have explored the ocean’s depths.

Consider the case where you have recently fought off a horde of drowned and found your first Trident. Which Trident enchantments should you choose, and how do you enchant it? For those questions, we’ve put together a list of the best Minecraft Trident enchantments.

A trident-exclusive enchantment, loyalty is one of Minecraft’s most iconic enchantments. Your trident will become loyal when you use it, as the name suggests.

As a result, it comes back to you after each throw. You can feel like the Greek god Thor with this costume. The Enchanting table and an enchanted book can be used for this.

As your enchantment level increases, the speed of the trident’s return will increase. You can upgrade to a maximum of three levels.

But, you will have to worry about your trident getting damaged if you throw it into lava. (Java-exclusive). The void cannot be returned. 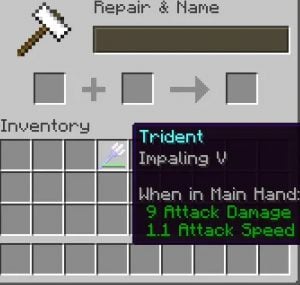 You can use this enchantment to damage mobs in Minecraft more effectively, as the name implies.

Impaling has a cap of five levels, making it one of the most dangerous enchantments in the game.

Running is the best option if you find someone drowned or another player using it. The Enchanting table and an enchanted book can be used to apply this enchantment.

The trident takes 2.5 hearts worth of damage with each level of this enchantment. And, it is possible for another player to kill you with a single hit if it is at its maximum level.

But, to avoid being overpowered, the extra damage is only applied to aquatic mobs in Java edition. For the Bedrock edition, it can be used on any mob.

Whenever they are in contact with water. Water in Minecraft counts even if it rains. In keeping with the theme of the Greek God Thor, we will produce lightning with our next trident enchantment. Be careful not to confuse it with a power-based attack.

A skylight is channeled through this enchantment when used. There is only one level in it. Yet it is more than enough for it to be among Minecraft’s most powerful enchantments.

An enchanted book and the Enchanting table can both be used to apply this trident enchantment.

For the sake of fairness, this enchantment is only effective when the mob whose attack is being prevented is under an open sky.

Hence, you can’t use a trident underground or in another dimension with this enchantment. Furthermore, if you are using a thrown trident, a thunderstorm must be in progress.

The benefits of this enchantment extend beyond just damage due to the trident’s lightning. 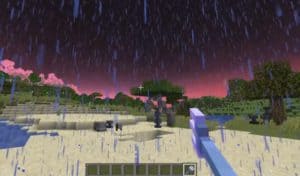 This next entry on our list of the best trident enchantments in Minecraft is nothing short of a superpower.

When the trident is thrown, the Riptide enchantment propels the players in that direction.

The same throw can even be used to attack mobs. As a result, you are also more likely to be confronted by that mob.

The degradation of riptide takes place at three levels. The distance coverage increases by 6 blocks with each new level.

Nevertheless, the player must be standing in water or rain for this effect to work.

Furthermore, since the trident technically never leaves our hands, loyalty cannot be combined with this enchantment.

As with Minecraft, you cannot use it in conjunction with lightning. Due to the possibility of causing more harm to the player.

The Enchanting table and enchanted books can both be used to apply Riptide. 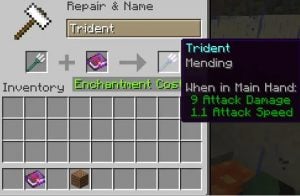 Durability is also the focus of our next enchantment. Mending, however, focuses on restoring items’ reduced durability rather than increasing their regular durability.

It is commonly used to repair damaged tridents dropped by drowned players. However, Mending enchantment cannot be applied with an Enchanting table.

You must find an enchanted book in order to use it.

This enchantment does not have any specific levels. As a result, the amount of durability restored depends on your in-game experience.

Two durability units are restored for one experience orb point when mending is performed. Technically, it’s not free. Additionally, it isn’t expensive.

And, as you progress in the game, you’ll have the option to automatically mend your trident by doing a variety of experience-based activities, such as cooking, killing, and more. 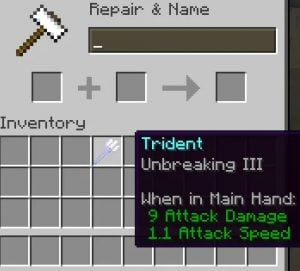 The unbreaking enchantment is one of the most common trident enchantments in Minecraft. The trident becomes more durable when it is applied.

And, as you might have guessed, it enhances its durability. As far as durability is concerned, it does not increase.

However, it decreases the chances of an item’s durability getting reduced quickly. If you apply unbreaking to your equipment, it will last longer.

Because a trident is extremely rare, you should apply this enchantment first. There can be a maximum of 3 levels in unbreaking.

It is easy to find enchanted books that have this effect. Additionally, it’s one of the first enchantments you can acquire when you use an Enchanting table. 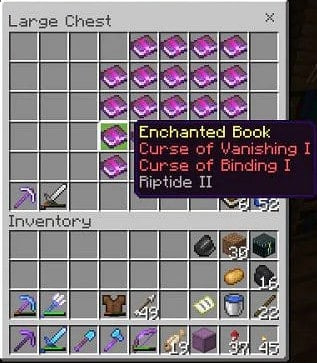 Lastly, we have the most popular in-game curse on our list of best Trident enchantments in Minecraft. It works very much like the Potion of Invisibility, which makes players invisible.

As a result of this curse, your trident will disappear after you die. But, at the site of your death, you won’t find these items.

And, compared to other common weapons and tools, the curse seems less problematic. However, since tridents are rare, they can impede your progress.

Additionally, it is the only enchantment in the game that can’t be removed by a grindstone.

It’s better to keep tridents with this curse in their chests than fight with them in risky situations.

The curse can only be used with an enchanted book since it is a curse. There is very little chance of finding a trident with this effect naturally.

How to Get a Trident in Minecraft

The only way to obtain a trident in Minecraft is to kill a drowned. In the ocean biomes, there is a zombie variant mob known as drowned.

An ocean ruin is a good place to find a drowned. A trident can only be found this way in Minecraft. This weapon does not have a crafting recipe.

And in addition, it cannot be found in any chest loot. In addition, drowned tridents don’t always have the highest health. Therefore, they must be repaired and enchanted before being used. 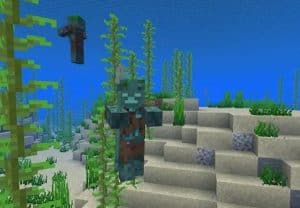 In addition to being a throwable weapon, tridents can also be used as close-range melee weapons.

Unless you are underwater, it has a slower attack speed than a diamond sword, but it deals more damage.

Tridents can kill mobs up to 80 blocks away from you, which is its best feature. It’s only then that you can grab it from a drowned with fewer than 10% chances of dropping it.

Now that that’s out of the way let’s look at the best trident enchantments in Minecraft.

How to Get Trident Enchantments?

It is possible to enchant a Trident in two ways. Using either an enchanting table or an anvil will do the trick.

Enchanting tables are pretty straightforward to use. As with any other weapon or tool, it works like any other.

You can max out the number of bookshelves on an enchanting table as per the usual mechanics. Or, use an enchanted book or combine two Tridents together to enchant a Trident using an Anvil.

Having a Trident in your arsenal is pretty powerful, let’s be honest. Trident is the perfect weapon for exploring the oceans or striking from a distance. When combined with the above enchantments, a Trident provides a much richer experience. Fighting off the army of Drowned for that one Trident is worth it because of these enchantments. So, make sure you try out these enchantments with your Trident.

How to Unlock Keyboard that Won’t Type on Windows 11

List of All Mobs in Minecraft 1.20 The Wild Update