Numerous multiplayer games are available for Android, iOS, and desktop right now. One of the better ones is Among Us. You can download the game for $5 from Steam. It’s great that the game works across multiple platforms. The game can be played on both PC and mobile platforms.

You might know that the game only offers text chat if you have played the game for a while. There’s no voice chat feature to talk about dealing with the imposter.

While the game does not offer a voice option, you can still use voice chat on Among US. However, you will need to join a Discord server to use voice chat. So, in this article, we will talk about the best discord servers among us.

Discord Servers for Among Us 2022

In games like Among Us, player interaction is essential. There is a text chat feature within the game, but it isn’t as interactive as voice chat. Moreover, an impostor will be weeded out each round through a discussion post. Because of this, many players have taken to Discord. Socializing, meeting new people, voice chatting, and more are all possible on the site. Any player of Among Us will love discord servers. Here is our list of the best Discord servers for Among Us. 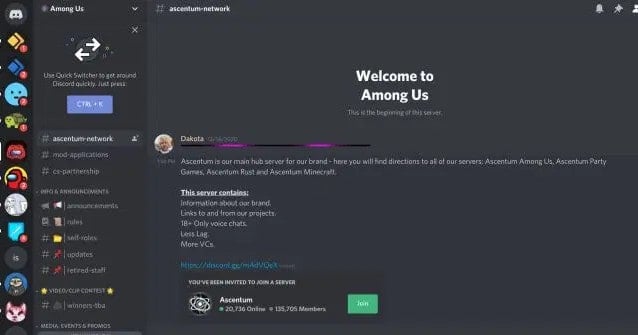 For Among Us, Among Us Discord is the second biggest server. As of right now, 535,00+ users are on the server. The server offers text channels and voice lobbies that make it exciting. Various regions have their own text channels.

There are 180 voice lobbies on the server as well. The number is even higher than the official server. There is a 10-minute cooldown period after joining the server before you can send a message.

Among Us developers can be found on this discord server. Innersloth has over 383k members from all over the world, making it one of the largest Among Us Discord servers. You can discuss all things about Among Us here. It’s great because you can find groups, play Among Us and use it for voice chat.

The game becomes much more interactive with this. The impostor can be found quickly over voice chat and booted out. Besides that, keep in mind the strict rules of the server. You must adhere to them. Failure to do so will lead to your ban. In summary, Innersloth is a fantastic Discord server for Among Us players. You won’t need to look elsewhere.

Over 170,000 people have joined Among Us Café, a Discord server for the Among Us community. Matchmaking categories are available on the channel. “VC” refers to voice chat. “Non-VC” means non-voice chat. In the “matchmaking-vc” channel, you’ll find voice chat rooms. You can chat and play in these rooms.

Among Us allows you to join the game by copying and pasting the lobby code. You can play Among Us in Discord with others using this method. The code can also be shared in the channel if you create an Among Us lobby. 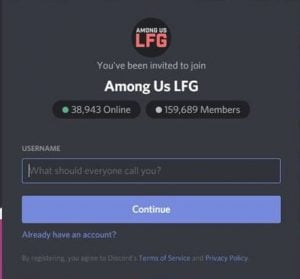 This is among the best Discord servers on our list. LFG stands for ‘Looking for Group,’ as the server name suggests. In addition, it is dedicated specifically to Among US players looking to join groups.

There are currently more than 175,000 active players on the server. There are, however, a few rules. It does not tolerate toxic behavior. Most of the time, there are moderators online. Some of them ban users occasionally. 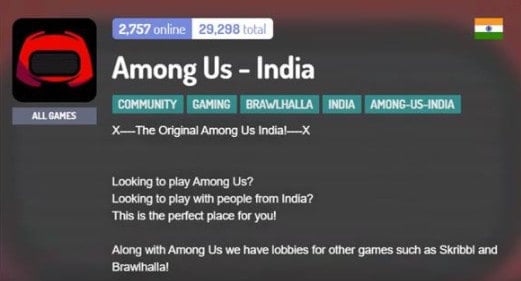 India’s Among Us server is the best for those who live there and want to play Among Us over Discord. Among Us India is the largest community in the country with over 28k members. The game can be played with any netizen. Various features such as voice chat and bots are available.

Also included are cool community features on Among Us India. There are also separate lobbies on the server for Skribbl and Brawlhalla if you want to play those games. The Among Us India community is vibrant. You should check it out.

Members of Excavice LFG can find others to play Among Us with the large and friendly community. There are over 65,000 players on the server.

On the “unlock-roles” channel, you can search for people to play Among Us with on the server. Once you’ve found someone, you can hang out in the lobby. The owner should tell you the code after you’re in the voice chat.

Alternatively, you may join a lobby that has been shared through the “join-match-here” channel. Among Us codes can also be shared on the “lobby-codes” channel. 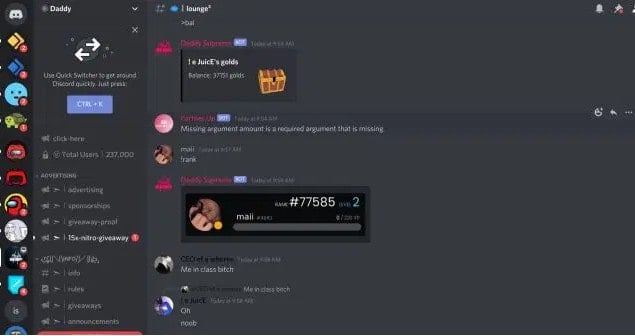 Among Us, as well as other games, are supported on Daddy. Each game has its own channel. It has a lot of useful tools and features to help you enjoy Among Us. The community itself has around 237k members.

You can also make voice calls, get support, and more, just like other servers. It is unique that this server allows you to watch anime. Through the process, you can meet new people. In addition, private groups can be created with your closest friends. Daddy is an excellent Discord server for Among Us.

It is an official subreddit server for Among Us. There are over 46,000 members. About a quarter are active at any given time.

First, you must choose your role via the “role-select” channel in order to have access to the channels. You’ll see channels on your left-sidebar after selecting a role. 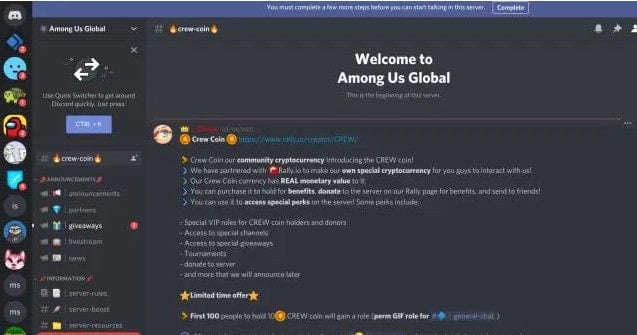 A large user community can also be found on Among Us Global, another Discord server. The server has more than 139k users. It has a rating of 4.4. This means that the server is relatively non-toxic. You can also do matchmaking here, just like you can with other servers, and find players to play Among Us with. Voice channels are also available. These can be used to interact with each other.

There are many giveaways at Among Us Global, which is one of the best features. Here’s your chance to get Among Us premium. Among Us Global is a great place to hang out if you want to have fun whilst playing Among Us as well as win free goodies.

You can socialize with other users on these Best Discord Servers for Among Us. Conversations between Among Us players are easy using the discord app. Select a server from the list above and join a conversation.