Discord is an application where you can communicate with specific communities by sharing text, images, video, and over audio. There are more than 250 million users on this software belonging to organizations such as gaming, education, reviews, etc.

It is possible that while sharing texts, images, or videos on any Discord server, you might want to refrain from openly talking about a specific topic. In such a case, you can mark your text, image, or video with a spoiler tag.

What is Spoiler Tag on Discord?

If you discuss the climax of a newly released movie or the plot twist of a recently published book, you can mark your text with a spoiler tag so that the suspense is not spoilt for other users. 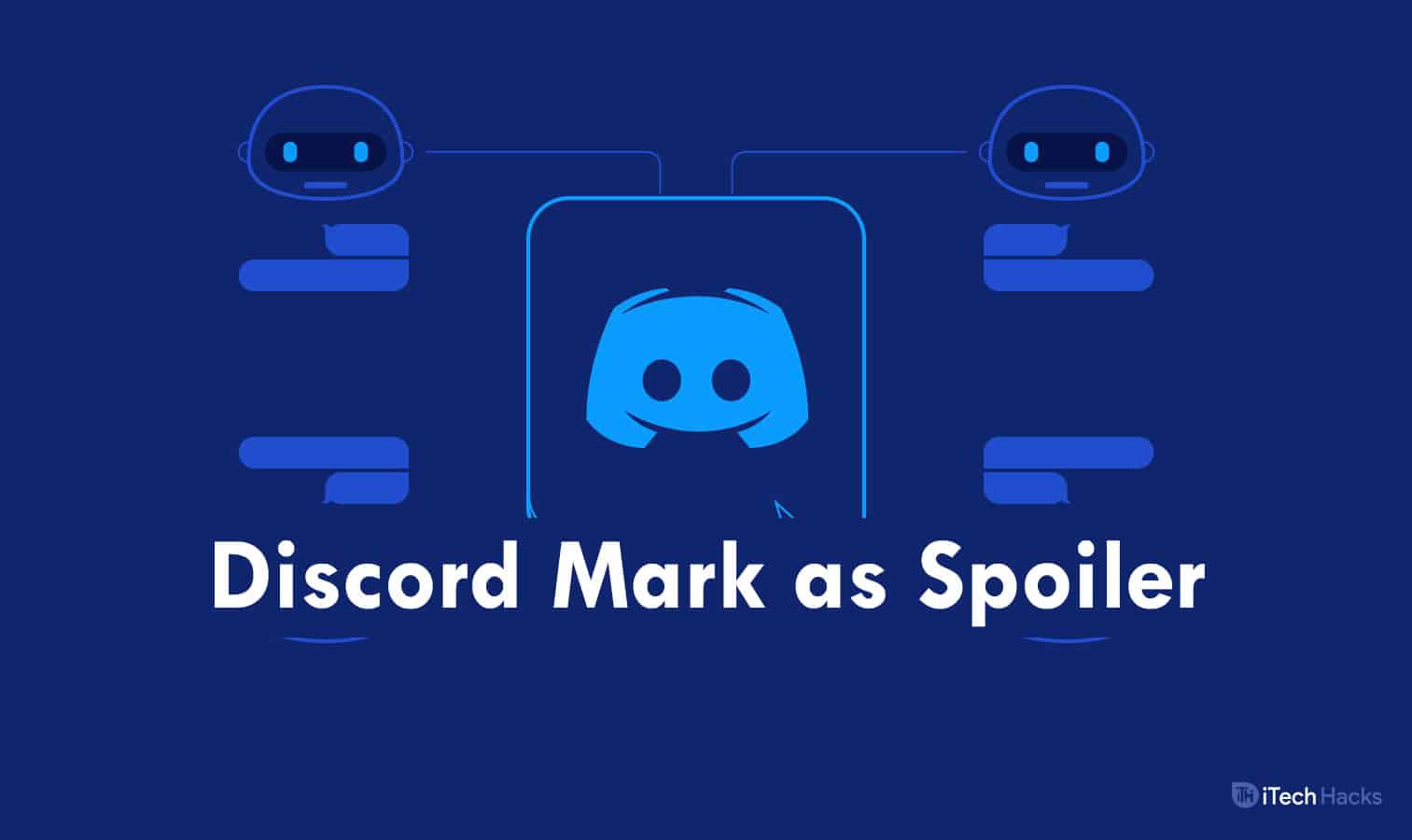 On marking your text with a spoiler tag, it gets blacked out, and users can view it by voluntarily clicking on it. Also, the images and videos which are marked with the spoiler tag are blurred out. Even they can be viewed by willingly clicking on it.

How to Mark Spoilers on Discord

You can mark the spoiler tag on PCs as well as smartphones. Below, we have listed some of the best methods you can use to mark Spoilers on Discord.

Method 1: Discord Mark as Spoiler (for PC and smartphones)

This is one of the easiest methods to mark Spoilers on Discord. The steps involved in this method are as follows.

Step 1- Type the text you want to send in the channel or group.

Step 2- Using the mouse, highlight the text you wish to mark as a Spoiler.

Step 3- You will notice that a formatting bar appears above the highlighted text. Click on the Eye icon from this bar. 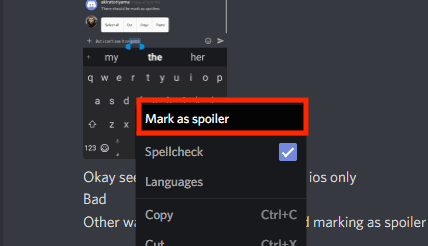 You can also right-click on the highlighted text and select the ‘Mark as spoiler‘ option from the drop-down box.

Step 4- The highlighted text will now appear between two vertical lines. This indicates that your text has been marked as a spoiler. Hit Enter to send the message in the channel or group.

As a result, the text which you had marked as spoiler will be blacked out for all the members of the channel or group. They can view it by voluntarily clicking on it.

Step 1- Type the text in the textbox of your channel or group.

Step 2- Enclose the part of the text you wish to mark a spoiler with two vertical bars on each side. For example, || text || is used to mark the word ‘text‘ as a spoiler. 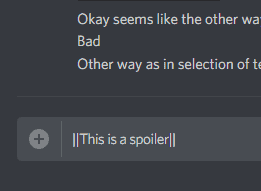 You can find these bars from the symbols on the keyboard of your smartphone. On your PC, press shift and backlash buttons simultaneously to get the vertical bars.

Step 3- Hit Enter to send the text. You will notice that the part enclosed by the vertical bars has been marked as a spoiler and has been blacked out.

In this method, the entire text gets marked as a spoiler. Unlike the previous methods, where you could mark a part of the text as a spoiler.

Step 1- Type the text in the textbox of your channel or group.

Step 3- Hit Enter, and the entire text gets blacked out for or all the members of your channel or group.

Method 4: Marking Images/Videos as a Spoiler on PC.

To mark an image or video as a Spoiler on Discord for PC is very easy. Let us look at the steps to be executed.

Step 1- Upload the attachment of the image or video which you wish to mark as a spoiler.

Step 2- Before coding on ‘Upload‘ check the ‘Mark as spoiler‘ checkbox.

On hitting enter, your image or video will be uploaded and will be blurred out. Other members can click on it to view the photo or video you have uploaded and marked as a Spoiler.

Method 5: Marking Images/Videos as a Spoiler on smartphones.

Discord has not yet added the feature to mark a video or image as a spoiler for smartphone users. However, you can follow the steps listed below to do so!

Step 1- From the file manager of your smartphone, search for the image or video that you wish to upload on your channel or group. 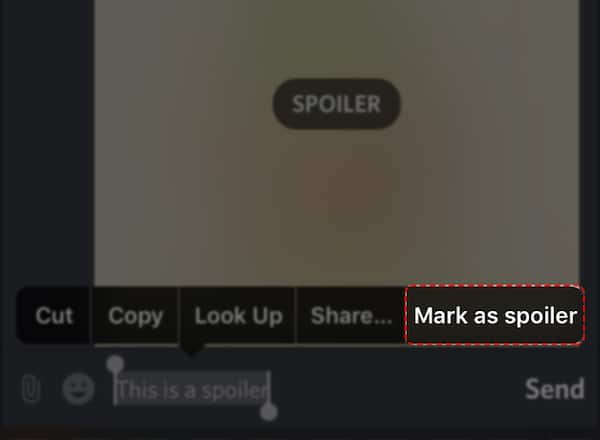 Step 2- Rename the image or video on your smartphone. The new name should start with ‘SPOILER_‘ without the quotes.

Step 3- Now, use Discord to share the same image or video to your channel or group. It will be automatically marked as a spoiler.

ALSO READ: How To Screen Share in Discord Server 2021

These are some of the best and the most straightforward methods you can use to mark your text as Spoilers on Discord for PC and smartphone users. The steps involved in these methods are easy to understand and execute. If you know of any better method to mark Spoilers on Discord, then please let us know about it in the comments section below.

How To Fix Camera Icon Missing on iPhone or iPad