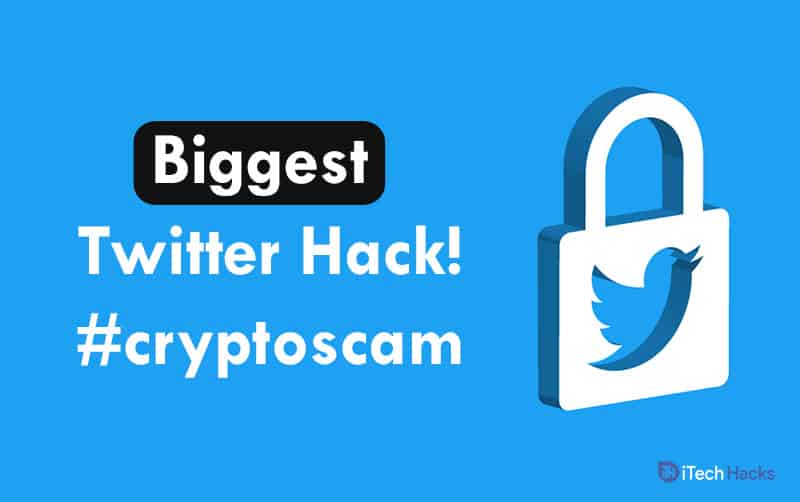 This came to light when fake tweets offering to send $2,000 for every $1,000 sent to a bitcoin address were made through these accounts and not only this, but the scam appeared to have happened in two rounds after the same Bitcoin-scamming tweets were made for the second time from the official accounts of Elon Musk and Bill Gates after their first tweets were deleted after these few things.

The Twitter Support announced on Wednesday evening that its team was investigating and wrote, “We are aware of a security incident impacting accounts on Twitter.” And further said that they are studying and taking steps to fix it, and they will update everyone very soon.

The craziest part of this Twitter Heist is that Twitter Support was also hacked they also posted the same message very intelligently.

Around 4 pm Wednesday in the United States, many high-profile accounts of Twitter-like Barack Obama, Joe Biden, Jeff Bezos, Kim Kardashian, Bill Gates, Elon Musk etc started tweeting a message saying that, any bitcoin sent to a link in the tweet will be sent back doubled, and offer the tweet said last just for 30 minutes. 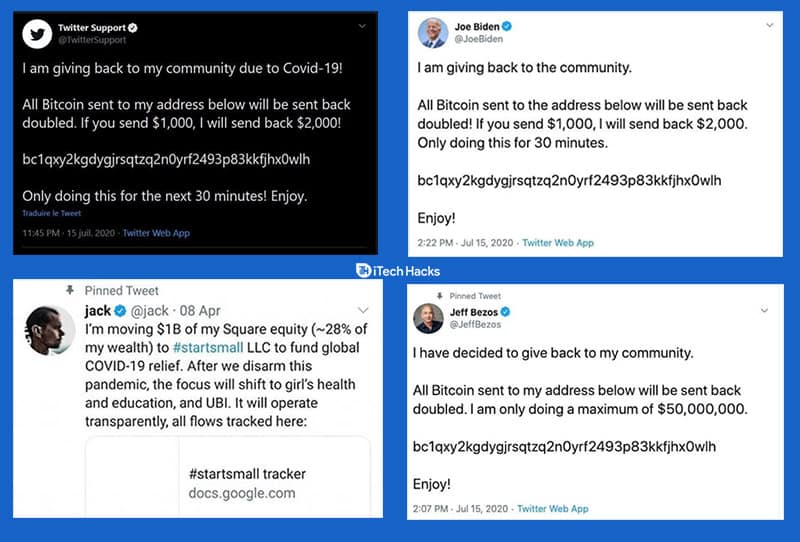 And the pattern which was followed by the hacker is like firstly the Apple and Uber handles were impacted and Elon Musk and Bill Gates followed after a couple of hours Barak Obama, Mike Bloomberg, Amazon founder Jeff Bezos, and Biden were also impacted by this hack, after that celebrity Kim Kardashian and boxer Floyd Mayweather also had been affected, and after all this Twitter locked many large verified accounts not only in the United States but also in the whole world.

List of High Profiles those who affected by this:

This is the World’s Biggest Twitter Hack of all time. Why we are saying this?

However, in the four-odd hours, the tweets were live, the Bitcoin wallet promoted in the tweets received over $110,000 via at least 300 transactions just in 40 minutes.

UPDATE: Hackers have been arrested behind this Twitter hack

On July 31st, the U.S. Department of U.S Justice arrested three masterminds behind the twitter hack. Mason Sheppard 19 Years old, from the UK aka “Chaewon,” Nima Fazeli 22 years old, from Florida aka “Rolex,” and an unnamed juvenile were carried this week with the plot to perform bitcoin scam, plot to perform money laundering, and the intentional access of a protected computer.

Twitter CEO Jack Dorsey called it a tough day for “us at Twitter” and then continued that, they feel terrible that this thing happened:

Tough day for us at Twitter. We all feel terrible this happened.

We’re diagnosing and will share everything we can when we have a more complete understanding of exactly what happened.

? to our teammates working hard to make this right.

Twitter earlier took the extraordinary step i.e. stopping many verified accounts. Even the password reset requests were also being denied and many other general “account functions” functions were disabled. And by noon ISD the verified users were made available to send their tweets again, but the twitter said that they are still working to fix it.
What is Twitter saying about the incident?

“Most accounts should be able to Tweet again,” said the handle four hours later and continued that, they continued working on a fix, that functionality may come and go and they are working to get the things back to normal as quickly as possible.

According to Twitter Support, the “coordinated social engineering attack” was executed by people who “successfully targeted some of our employees with access to internal systems and tools”.

“We know they used this access to take control of many highly-visible (including verified) accounts and Tweets on their behalf. We’re looking into what other malicious activity they may have conducted or information they may have accessed and will share more here as we have it,” another tweet said.

Twitter said that even as it has limited functionality of the affected accounts, it also restricted access to internal systems and tools.

The vulnerability that has been exploited was within the Twitter systems and not on the user side. This clearly means that the vulnerabilities are on either Server ends or entire twitter is buggy?

It’s not a Coincidence

Twitter launches on July 15, 2006 – and the biggest twitter hack happened on 15 July 2020. Well, What are you thoughts on this? Is this hacker’s choice or its just a coincidence.

How To Enable Windows 11 Screen Savers